An Interview with Donna Besel 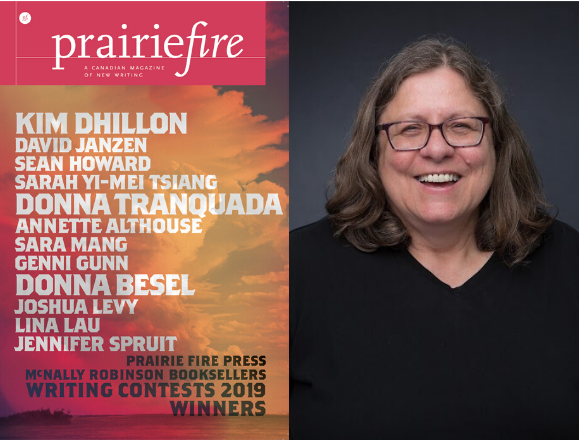 Congratulations to Donna Besel. Donna has been a member of CNCF since 2014, when she attended the Calgary symposium. Her essay, “The Bay Filly,” which tells the story of a trip to pick up her new horse when she was twelve, won first place in Prairie Fire Magazine’s Annual Creative Nonfiction Contest. The essay will be published in the summer edition of the magazine.

Can you tell us about the inspiration behind your award-winning piece?

For almost ten years, I worked in the Manitoba Arts Council’s province-wide Artists in Schools program. This involved visiting schools for short terms, usually one or two weeks, and teaching story-telling and creative writing in K-12 classes. My message was simple – “you have a story to tell and you have the right and ability to tell it.” I’d ask a question, we’d discuss the idea or act it out, and then everyone would create written responses. When the students wrote, the teachers wrote, and I wrote.

After a few days of thinking, talking, and writing about why people tell stories and how to tell them more effectively, one of the questions I asked students was “What is your most vivid childhood memory?” When we all shared these pieces, the resulting stories consistently delighted, amused, and moved the listeners.

For me, one story that kept coming up described a trip with my father and one of my older sisters to pick up three young horses in Minnesota. The experience involved lots of mix-ups, a truck breakdown, and the discovery that my new filly was badly injured. The Prairie Fire creative nonfiction story is an expanded version of what I wrote several times while working in those classrooms.

I believe this piece deals with the past. Did you use any tricks to remember your feelings back then?

I was twelve when I got my horse. Most of the details remained clear but some were not as definite. Also, some of my early memories have been messed up by recurring trauma. So I took what I knew from other parts of my childhood, and what I discovered later in life, to help flesh out the piece. (When I was an adult, my father was charged and convicted for the sexual assault of me and three of my sisters. Two other sisters refused to make statements regarding his crimes).

What was challenging about writing this piece?

From experience, I know some people freak out if you write or speak too openly about childhood sexual assault. They prefer to think that a father who gets a horse for his daughter must be a good guy. It’s hard to convince them that a person can do evil things but also have positive intentions. It scares them. I sort of slid the abuse element in at the end of the story. 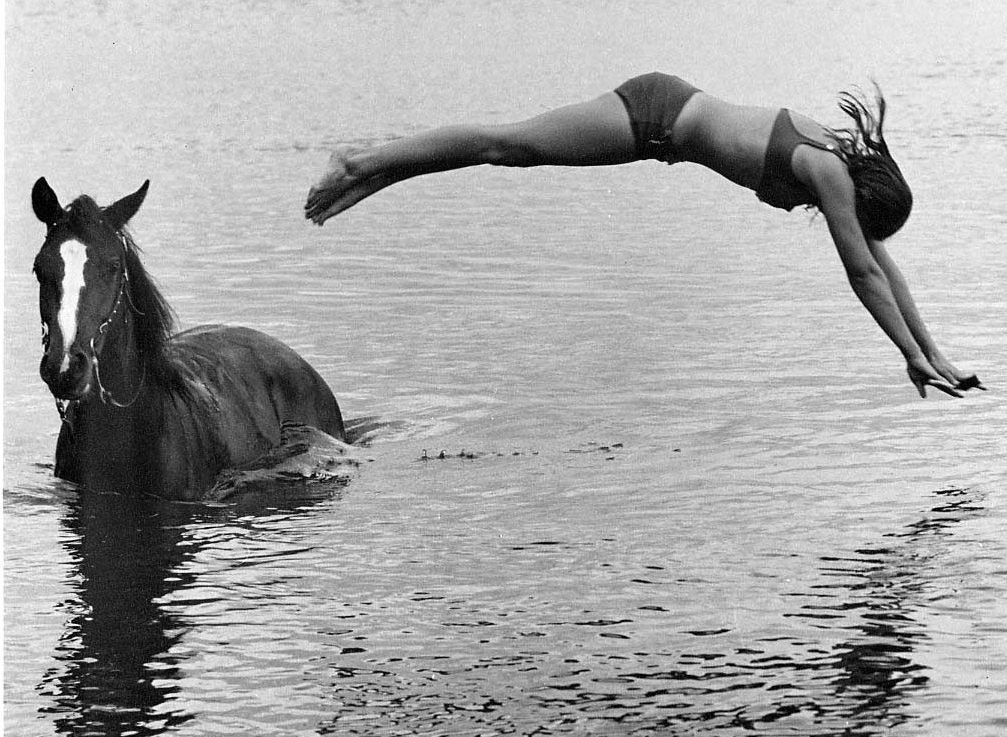 Donna, 16, diving off her horse into West Hawk Lake, Manitoba.

Do you have any writing rituals?

I don’t have specific rituals. Sometimes I play a couple of games of Solitaire to empty my head of day-to-day concerns.

Are you working on something now? If so, what?

I’m working on a series of eleven linked stories, set in a fictional boreal forest community (FYI – I self-identify as a boreal writer. It’s where I’ve lived all my life, except for university years).

Here’s a short description of this project:

After failing to get a job in the city, Adam Brewster, a new graduate from journalism school, accepts a job as the sole reporter in the isolated community of Biscuit Lake. Each story includes an experience that affects Adam. In some, he appears as one of the main characters. In others, he appears as a witness to the traumas and tragedies of other characters. The Eastside Stories is modeled on Winesburg, Ohio, Sherwood Anderson’s collection of twenty-two linked stories, written in 1919. It is also influenced by Elizabeth Strout’s Olive Kitteridge, a collection of linked stories written in 2008. Her book won the Pulitzer Prize and was made into a television series.

Has writing helped you (or not) to survive the Covid chaos?

The COVID 19 crisis hasn’t altered my life or my writing much, but my adult daughter’s living with me part-time definitely has. She’s “working from home” at my place because she doesn’t have a proper office set-up at her house. The positive part – her two chihuahuas provide laughs, exercise, and cuddles. During two days of the week, she returns to her physical workplace in Winnipeg. I use those days to focus on writing and writing-related tasks. One thing that affects me emotionally is the burst of online pandemic readings and creative writing classes – truly inspiring but often out of reach for me because of crappy internet/cell service in my rural location.

Do you have any tips for new writers on how to submit to contests or journals?

Write often and read widely. Then set goals for submissions (for example, once a week or once a month). Research to find appropriate places and send out your work. Get used to rejections. If one publisher/journal/magazine doesn’t like it, another one might. I like to enter contests. The odds may not be great, but you can win money and get noticed. 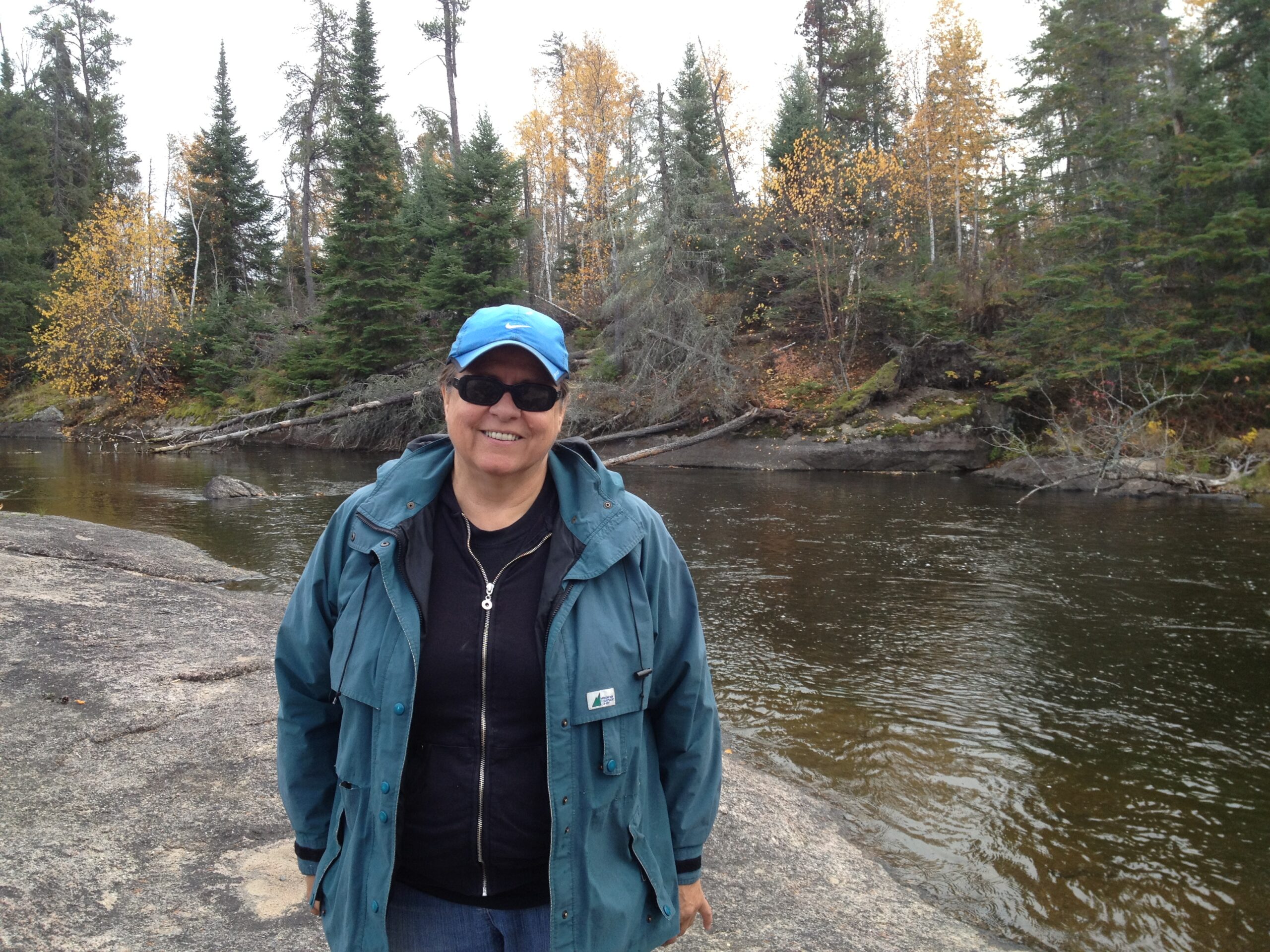